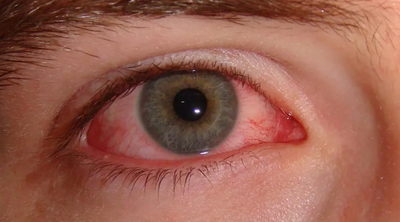 Suddenly your eye turns red. It sinks and itches as if a grain of sand is lodged in it ... You have swollen eyelids and on top of that you have a cold. Maybe someone in your family or friends has even recently had the same symptoms? Do not panic ! as unpleasant as it is, this discomfort is usually a sign of a perfectly benign disease: simple conjunctivitis. Here is some information about this pathology.


Symptoms
The eye is red, even very red. It itches a lot, tears and is stuck in the morning, associated with secretions often described as purulent. A feeling of grain of sand is present, a very significant discomfort, but never a frank pain. Most often the vision is not altered. Sometimes, however, a slight visual blur may be associated. In principle, there is no glare. Sometimes a painful lymph node may appear in front of the ear and sign the diagnosis. This is called pretragial lymphadenopathy, which is often associated with flu-like symptoms (fever, cough, irritation of the airways).


Why consult?
Conjunctivitis is a mild disease, which, as the name suggests, affects the conjunctiva. However, it is not uncommon for the disease to infect the cornea as well. We then speak of "keratoconjunctivitis", which the ophthalmologist can objectify during his examination in consultation, with the instillation of a drop of fluorescein. This is a particularly aggressive form, usually caused by an adenovirus (ADV) sometimes treated with high doses of anti-inflammatory drugs to regress corneal damage.
During his examination, when administering fluorescein, the ophthalmologist will also take care to eliminate an abscess, especially in contact lens wearers. He will also need to be careful to rule out other differential diagnoses such as herpes (which can sometimes mimic conjunctivitis), uveitis, scleritis, keratitis and all causes of red eye.


Attention to children and babies:
Young age is a time of vulnerability which one should be aware of. If the examination of the newborn and children is difficult, a brief glance at the cornea with fluorescein is essential to clarify the diagnosis. In the event of proven conjunctivitis, an exclusion from school may be recommended.


It is by far the most common infectious conjunctivitis! The picture is usually bilateral, and occurs readily in an epidemic context: a child, a spouse, a colleague may have presented the same symptoms in the days preceding the onset of the disease. The oropharyngeal sphere and the patient's lungs can be affected by this virus which can then be the cause of a cold, laryngitis, sore throat, bronchitis, flu and fever. . The list of viruses that can cause this condition is long (Respiratory syncytial virus, adenovirus ... and even chickenpox!)


This infection can also be caused by other microorganisms, especially bacteria, although this is much rarer. And there, beware of preconceived ideas! the purulent nature of the secretions is not necessarily in favor of this origin and can just as well be observed in viral conjunctivitis - the severity of the infection being only very relatively correlated with the type of germ to be dealt with . Many types of bacteria can be involved in bacterial conjunctivitis. We even observe in some cases genuine contamination by sexually transmitted germs (Chlamydiae trachomatis, Neisseria gonorrhoeae in particular)


To behave
Following the consultation allowing the ophthalmologist to clarify the diagnosis, abundant eye washing will always be prescribed. In addition, there is the following precaution:


Conjunctivitis is an extremely contagious disease. Even before consulting, in the event of suggestive symptoms, hygiene should be taken care of to prevent the disease from spreading to those around you. It is a diffusion by the contact of secretions loaded with viruses with the human mucous membranes. A manual transmission is quite possible. You should therefore wash your hands regularly, especially after contact with your eyes. Contact with young children and especially newborns should be avoided as much as possible. In collectivity, eviction may be prescribed.


2 / Antibiotics are not always automatic


Your eye doctor has not prescribed an antibiotic for you? This is completely normal ! As we have seen, conjunctivitis is most often a viral disease, and antibiotics are completely ineffective on viruses. The prescription of drugs will be at the discretion of the doctor, who sometimes may consider prescribing anti-inflammatory drugs to alleviate symptoms.


3 / Patience and washing are more than strength or rage


In any case, patience will be your best ally, as will abundant eye washes and rinses as recommended and prescribed. In fact, like the flu, viral infections are unfortunately not very accessible to modern treatments.


4 / The place of corticosteroids


If conjunctivitis becomes chronic, the manifestations can last several weeks or even several months. They are linked to an autoimmune disorder rather than the pathogen responsible for the initial infection. In this case, corticosteroid treatment with eye drops may be prescribed (never first-line). This treatment will reduce symptoms very quickly and effectively, but its use is limited as much as it can become habit-forming, with symptoms of conjunctivitis resuming when this treatment is stopped making withdrawal difficult. You can discuss the benefit / risk balance of this treatment with the doctor, keeping in mind that the shorter duration of use will be the best compromise.